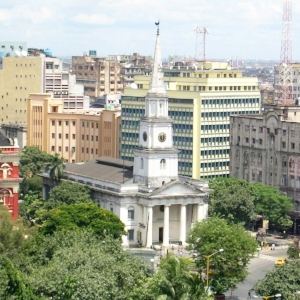 A shove here. A push there. A multitude of people busily walking across. The hustle and bustle of this place can easily help it win the title of the busiest areasin Kolkata. Such is the feel of B.B.D Bagh.

When the East Indian Company landed in Kolkata, they built a square in the western part of the city, around a large water tank called the Lal Dighi, as their political and commercial centre of trade and communication. As they expanded their territory in the country, making erstwhile Calcutta their capital, several important buildings where built around this square. The most important of these is the Writer Building, housing the secretariat of the Government of the State of West Bengal. The Royal Exchange Building with the Bengal Chamber of Commerce and Industry, the Calcutta Stock Exchange, the Standard Chartered Building and many other financial establishments within its premises, was built on the northern side of the square.

Towards the south, the Raj Bhavan was constructed. The western side saw the emergence of buildings like the General Post Office, the Royal Insurance Building, the eastern office of the Reserve Bank of India, the headquarters of the Eastern Railway and the head office of the Kolkata Port Trust. The eastern end became the hub of commercial activities with the construction of several official buildings. This soon earned the square its local name of Office Para.

After the three Indian revolutionaries, Benoy, Badal and Dinesh were compelled to commit suicide, for shooting the then Inspector General of Prisons, N.S. Simpson to death, this square was renamed as the Benoy Badal Dinesh Bagh (B.B.D Bagh), to commemorate their courage and sacrifice.

With a whole treasure chest of history in every nook and corner, BBD Bagh is surely the richest heritage location in Kolkatas memory lane.

B.B.D Bagh was originally known as the Dalhousie Square after Lord Dalhousie, the then Governor General of India. The square was a part of what was known as the White Town, where only the British could reside.